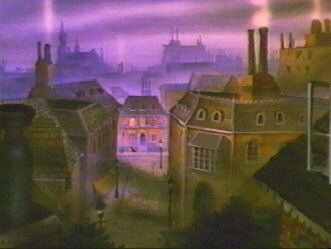 Basil of Baker Street and the drunken Bartholomew is voiced brillantly by British actor, Barrie Ingham, well known in theatre and on television, such as Masterpiece Theatre. Mr. Ingham has been co-starring in the Broadway musical, Jekyll and Hyde.

Dr. David Q. Dawson (plus a thug and a guard) is portrayed by Val Hettin; he also does the voice of The Sultan in Aladdin.

Wayne Allwine and Tony Anselmo, the current voices of Mickey Mouse and Donald Duck, can be heard as Thug Guards in this film.

Candy Candido was the memorable voice of the Indian Chief in Peter Pan, as well as the Goons in Sleeping Beauty and the Crocodile in Robin Hood.

Alan Young, who did the voice of Hiram Flaversham (Olivia's father, the toymaker), also does the voice of Scrooge McDuck.

The Great Mouse Detective is the 31st animated feature film released by Disney, based on the children's book series by Eve Titus, Basil of Baker Street. The books were about a little mouse living the life and career of his idol, Sherlock Holmes! With his loyal partner and friend, Dr. David Q. Dawson, they investigate the crimes of London.

After the box office failure of another Spielberg film, Young Sherlock Holmes, the Disney marketing department deemed the title of the original source novel, Eve Titus’ Basil of Baker Street, as sounding too "British" for a so-called kids movie, and straddled it with probably the generic and unimaginative title The Great Mouse Detective. Angry at what amounted to a slap in the face of their creativity and artistry, an anonymous animator posted a gag memo in the Studio at that time, claiming that all the previous animated features were going to be renamed with similar, simplistically ridiculous monikers, such as Seven Little Men Help a Girl, The Wooden Boy Who Became Real and my personal favorite, A Boy, A Bear and a Big Black Cat. 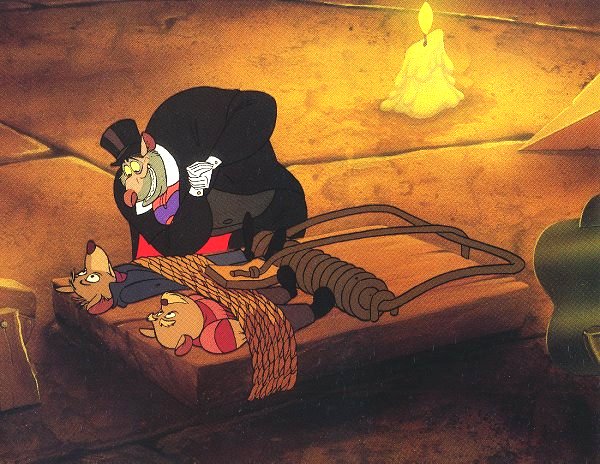 After a four-year period of story development, animation took just over one year to complete. This remarkably short production span was possible due to new efficiencies in the production process (such as video tests and computer-assisted layouts and graphics), and an increased emphasis on story development prior to the start of production.

One hundred and twenty five artists were involved in making the film.

An innovative application of computer technology can be seen in the climactic scene where Basil faces Ratigan in a final confrontation inside the turning and thrashing gearworks of Big Ben. The 54 moving gears, winches, ratchets, beams, and pulleys were literally drawn by the computer and create a unique background for the characters, who had been animated in the usual way.

Employing for one of the last times the time-honored animation style of its predecessors and, for one of the first times, the then brand-new technique of computer animation that would eventually become more and more commonplace, The Great Mouse Detective, like its follow-up, Oliver and Company, found itself on the cusp of the new wave in animated films

Sherlock Holmes' voice in the movie (a 25-second dialogue) is that of Basil Rathbone (1892-1967), who portrayed Holmes for over 35 years! Disney used a sound-recording of his Sherlock Holmes radio productions. However Nigel Bruce did not voice Dr. John H. Watson, instead the voice was done by a Laurie Main.

The box that the white girl mouse cries on is "Gaston's Liver Pills", a reference to the father of one of the artists.

When Basil is with Olivia and they are on the trail of the one legged bat. You will find Dumbo sitting on the shelf along with the other toys.

Shortly before his death, Vincent Price (1911-1993) said that one of his most favorite roles was the voice of Professor Ratigan, especially since two original songs had been written for him.

Just as The Black Cauldron (1985) had been the Sleeping Beauty (1959) of the new breed of animators, it needed to be followed by another 101 Dalmatians (1961).  Just as Beauty had been a 70MM big budget disaster, so was Cauldron.  And, just as  Dalmatians had to prove that the animators could still make a popular movie and make it for a small amount of money, so The Great Mouse Detective had to save the floundering animation department and do it at the lowest cost possible.

During the mid-80s, there was quite a bit of change going on at Disney.  Walt Disney Productions was now The Walt Disney Company and it had a whole new board of directors.  One of the new regime, Jeffrey Katzenberg, had been responsible for the butchering of The Black Cauldron and he was in charge of film production.  Why should the young animators put their trust in the man responsible for editing their first movie?  Luckily, they were given the opportunity to be led by two of their own.

Ron Clements and John Musker, two animators who had quickly advanced through the ranks and were now in story, had written a treatment for an animated homage to Sherlock Holmes based on Eve Titus' Basil of Baker Street.  The new management liked the idea of a more fun picture to follow the darkness of Cauldron and so, Ron and John were given the go-ahead to direct this new picture along with Dave Michener and Burny Mattinson.

It was a risky move to release this picture on the heels of Cauldron, as it was also not of the traditional Disney ilk.  Disney had never before released a picture with such a tempo (except, perhaps for 101 Dalmatians).  From the moment the picture starts, the story draws the audience in and never stops until the story has ended.  There are no sequences which seem to go nowhere (a major problem in Cauldron) and the songs, although certainly not classics when compared to most of the Disney favorites, do their best to move the action along rather than slowing it down.  The script is strong, and the characters well developped. The Great Mouse Detective demonstrated that Disney feature animation was already over its crisis and headed in the right direction.

Last but not least, one of the greatest advantages this film has over The Black Cauldron is the animation of Glen Keane.  Since his work on the bear in The Fox and the Hound (1981), Keane had proven himself the most promising talent among the new animators.  His work on The Black Cauldron had been cut and thus the picture did not carry his name in the credits.  With this film, Keane would be able to prove his talent through the wonderfully wicked villain, Ratigan.  A mixed creation of the Clements/Musker script and Keane's wonderful imagination and sense of character, Ratigan is the ideal villain for Basil.  A rat who is shamelessly attempting to pass himself off as a mouse ("A BIG mouse!"), Ratigan is both cunning and feminine.

Henry Mancini also contributed a great deal to the mood of this picture. Mancini is well-known for his musical scores and he certainly does not disappoint with this one.  The animators, still looking for something new to get them involved, weren't exactly thrilled by the prospect of working with an old-Hollywood composer, but they wouldn't get to work with contemporary music (if one overlooks the fact that then-contemporary artist Melissa Manchester penned and performed "Let Me Be Good to You") until 1988's Oliver & Company (1988).  Just as a contemporary score was appropriate for that film, so would it have been equally inappropriate for this one.

The story and planning took 4 years, but the actual "creating" took only 1 year.  During the making, a vast majority of Disney's talent, time, money ($25 million, in fact, the world-record sum during the time for an animated feature) were concentrated on the epic animated film, The Black Cauldron; while a smaller crew worked on a different feature with a much smaller budget.

The Great Mouse Detective is a film which did not strive to make a mark. It did not take any risks in its animation style.  Nevertheless, this is the first Disney animated film to use computer generated animation.  With this film, Disney began a history of most often using computer animation to enhance, not take away from, the characters and plot.  In July 1986, in a big shadow of the most expensive feature's critical and huge box-office failure the previous year, The Great Mouse Detective received warm reviews and nice financial success.