Cast * Interesting Facts * Behind The Scenes

The film was based on a children story made of only 8 drawings and a few lines of text. Walt Disney gave it to its lead animators, asking them to see what they could get out of it.

After the bombing of Pearl Harbor, a picture of Japanese General Yamamoto bumped Dumbo off the cover of "Time" magazine.

Its clear-cut characters and succinct story – and running time of 63 minutes – made Dumbo a bargain to make – just $812,000.

Like Dopey in Snow White And The Seven Dwarfs, Dumbo never utters a single word.

The movie contains the studio's first surrealistic sequence, "Pink Elephants On Parade," who appear after Dumbo swallows a basinful of champagne.

It is the shortest Disney animated, with a running time of 64 minutes.  RKO salesmen argued that Dumbo was too short for a feature and asked Walt Disney to add another 10 minutes. Walt, who had originally planned Dumbo as a 30-minute featurette, refused: "No, that's as far as I can stretch it."

Along with continuing financial difficulties, Disney found himself confronted by labor unrest.  As a direct or indirect result of a strike, the Studio lost some excellent animators as well as much of the freewheeling atmosphere that had typified it in the thirties.  The Age of Innocence was over.

Nevertheless, Walt Disney considered it as one of the smoothest, easiest projects he ever worked on.

Storyman Bill Peet remembered in the late '90s that Dumbo "would have been twenty minutes or so, which wouldn't have been anything.  They put all the rich boys, the top animators making the big salaries, working on Bambi. They wanted to make it a gem. Originally Dumbo was going to be only a half-hour, sort of a special. When Walt saw what we were doing with it, he said it might make a good feature. Well, Dumbo made money. In fact, it was the only Disney film to make money until Cinderella.  Walt got a little stingy with us on Dumbo because they had a showpiece with Bambi. They could play around with little things like the raindrops. Beautiful, but slow and expensive. We weren't allowed any trimmings. Bambi was a wedding cake. Dumbo was one layer with a little bit of icing. Ours was more successful because it had common appeal, even though the animation was crude in some places. Dumbo didn't make big money. It had only cost $800,000, so all it had to do to make its cost back was go a little over $1 million. The other features had cost $3 million, plus the cost of the prints, and with no foreign market because of the war."

Rumors have it that the 64-minute edition known today represents an edited cut of the original film. Allegedly the black crows received much more screen time in the original rendition as they acted as a form of Greek chorus and commented on events. According to this concept, they were cut because of racial considerations; the crows were viewed as negative stereotypes so most of their material was sacrificed to the gods of political correctness. These alleged edits were made decades ago, which is why virtually no one remembers the original material.

Dumbo won the Oscar for Best Score for a Musical Film.  "Baby Mine" was also nominated for Best Song.

It is the first of Disney's films to have been released on video -ever!- in 1980. It has since been through 3 generations of cover art.

A sequel to Dumbo is currently in the works. The pictures below as well as a French trailer were unveiled in late September 2001. Dumbo II follows the adventures of Dumbo and his friends from the circus: an ostrich jealous of Dumbo because she can't fly and feels like he's stealing her show, twin bears that always rush to do everything, a zebra that's always asking questions and a hippo who wants to do everything on his own. When they are freed in the city by accident, they are at first really excited and happy... but soon start missing their home. They'll try everything to find the circus back, and will discover on the way the value of true friendship!

It was revealed in March 2002 that Disney considers animating Dumbo via CGI in this sequel. An insider adds that "the sketches you've seen is conceptual art and storyboards, which are the same ones that showed up on the trailer. Disney TVA is still working on the story for this one, in fact the original director got recently fired. There is a famous San Francisco computer animation related house doing top secret animation tests for this one as we speak (and not is not Pixar, PDI or BlueSky, but it's still famous). They might change their minds after the tests (hopefully)." And indeed, a few weeks later, an insider reported that the CG animation tests "where a terrible failure thankfully even for executives. So, the project seems to be back to traditional animation for now."

However, Jim Hill revealed in May 2003 that Dumbo 2 is currently on hold "because Disney Television Animation is still trying to decide whether or not it wants to go forward with CG sequels to [this] classic. Disney was serious enough about this idea that it had Joe Grant, the 95-year-old Mouse House vet who was actually the supervisor of story of Dumbo back in 1940-1941, come in last year to view test footage of several CG versions of the flying pachyderm. Unfortunately, none of the Dumbo test footage was quite up to snuff. So Disney Television Animation opted to put Dumbo 2 and Bambi 2 on hold for a year or two, 'til enough advances can be made in computer animation so that  sequels could be produced to these 1940s era Disney classics that actually looked like the original animated films."

After suffering a setback because of poor initial grosses from Pinocchio and Fantasia, Walt Disney decided to make a low-budget feature to recoup some of the earlier losses. Dumbo, made for a minimal $800,000, did just that, grossing more than $2.5 million on its first release in 1941. 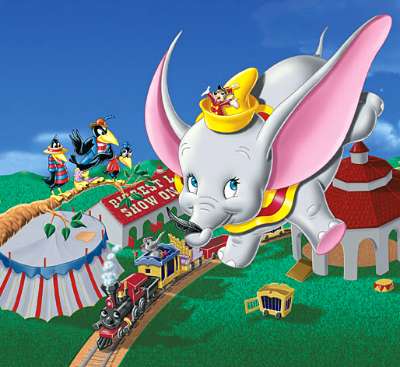 Dumbo spent only six months in story development and one year in animation. In a 1980 interview, animator Ward Kimball commented, "The reason we brought it in for a low price was that it was done quickly and with a minimum amount of mistakes. The story was clear and airtight to everyone involved in the project. We didn’t do a lot of stuff over due to story-point goofs. There were no sequences started and then shelved, like in Pinocchio. Walt was sure of what he wanted, and this confidence was shared by the entire crew. Dumbo, from the opening drawing, went straight through to the finish with very few things changed or altered.

"Sure, we've done things that have had a lot more finish, frosting, and tricky footwork," Kimball noted, "but basically, I think the Disney cartoon reached its zenith with Dumbo. To me, it is the one feature cartoon that has a foolproof plot. Every story element meshes into place, held together with the great fantasy of a flying elephant. The first time I heard Walt outline the plot I knew that the picture had great simplicity and cartoon heart …" Audiences and critics shared the animator's enthusiasm for the film. Walt Disney biographer Christopher Finch called it "probably the most spontaneous animated feature that the Studio has ever produced … a delightfully unpretentious picture, relying almost entirely upon charm and humor rather than upon spectacular effects." Film critic Richard Schickel wrote that it "recaptured some of the freshness, exuberance, and innocence of the short cartoons as well as their pure and simple form." Film historian Leonard Maltin remarked on the visual aspects of the film, noting that Dumbo himself doesn’t speak, and that "as delightful as the soundtrack is, especially with Timothy's dialogue, one could turn it off and still follow every scene."

Humorous characters also lend much to the success of the film, and the carefully chosen voices include Disney's first use of the versatile Sterling Holloway (best known as Winnie The Pooh), beginning a happy collaboration that continued for more than 40 years.

RKO complained that at 64 minutes, Dumbo was too short for a feature, and wanted Walt to add another 10 minutes. Walt, who had originally planned Dumbo as a 30-minute film, refused. "No, that's as far as I can stretch it. You can stretch a thing so far and then it won't hold. This picture is right as it is."