Home on the Range (formerly known as Sweating Bullets) 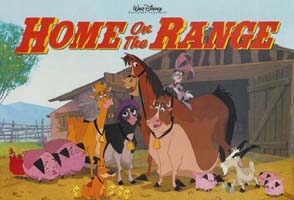 Directed by: Will Finn and John Sanford
Written by: David Burnham and Gregory Jbana
Music by: Alan Menken and Glenn Slater

Production Start Date: April 15, 2001
Budget: Disney hopes the film can be made for significantly less than $90 million
Release Date: April 2004 (pushed back from its original November 26, 2003 slot)

Some might think the great heroes of America's fabled West are the cowboys or the lawmen. But of course we all know the real hero of the west: the cow. Disney has opened the stable door on these unsung heroes in an hilarious comedy: a woman (Sarah Jessica Parker) who can't make the mortgage payments on her farm, is faced with eviction. Three dairy cows (Maggie, Grace, and Mrs. Caloway) band together as bovine bounty hunters and set out to nab a notorious cattle rustler, a wanted criminal named Alameda Slim (Randy Quaid) whose capture carries enough reward money to save the farm. The cows get help from Buck the Stallion (Cuba Gooding Jr., who is frustrated about being just the sheriff's delivery horse, and wants to capture Alameda Slim to obtain the glory that has so far eluded him). But little do they know, as Alameda Slim has a secret weapon--an hypnotic yodel that mesmerizes his bovine pursuers... Not surprisingly, cowboys will reportedly not drink, smoke, cuss, or carry guns in Home on the Range.

Plot Summary from Coming Soon!
A family farm inhabited by a widow (Parker), her young daughter, and various and sundry farm animals. The widow owes $1,000 mortgage on the farm and has no way to pay for it, and the cows get wind of the trouble. Fearing that they'll be sold to the local meat-packing plant, the cows seek to find a way to earn the money. Enter the family horse, played by Cuba Gooding, Jr. He used to belong to a bounty hunter, and knows a great way to save the farm. You see, he's heard that in the nearby town, there's a bandit afoot (Quaid), with a $1,000 bounty on his head."

This is the project that kept Mike Gabriel and Mike Giamo busy since 1995's Pocahontas, though they were dropped from it in October 2000, before production started. Will Finn (lead animator on Cogsworth in Beauty and the Beast and director of The Road to El Dorado) and John Stafford are replacing them.

In August 2000, when the project was revamped from the ground up, the original Sweating Bullets title (with a G) was rumoured to have been modified to Sweatin' Bullets by Disney, in order to give it a tone better adapted to the new premise: early versions being supposedly so completely politically correct and non-offensive the movie turned out very bland. Nevertheless, the first logo picture released seems to prove this rumour wrong.   Among other changes, the title character, a bull named Bullets, was supposedly dropped from the movie.

Voice session work began in the early summer of 2000, but since Disney decided to retool the project altogether, most voice work will probably have to be done all over again.

Disney News scanned the pictures below, taken from the movie's internal preview:

This will be Disney's first animated musical since 1998's Mulan.  "Is the musical coming back? Why yes. We've got musical cows," said producer Schumacher.

Country superstar Dolly Parton is rumoured to provide the singing voice of one of the character.

Disney is planning to relaunch the Frontierland attraction at Disneyland, using this movie's characters as its new focus.

After Antz and Pixar's A Bug's Life, The Road to El Dorado and The Emperor's New Groove, Jeffrey Katzenberg's Dreamworks is once again putting a project with a theme similar to a Disney blockbuster on the fast tracks in an attempt to get it out first: Spirit's production was given a start on February 22, 1999.  Spirit is a western taking place in the 1800s, featuring horses as the main characters (including the title name), and also the first animated film in Cinemascope.  A western from the point of view of a horse named Spirit, a western from the point of view of a bull named Bullets--see any similarities??

Short clips were made available for the first time in early July 2001.

As of July 2001, Alan Menken already completed the first three songs for this musical, one of which was recorded by KD Lang.

A group of country singers called the Willies (likely headed by David Burnham) are rumoured to be narrating the feature in songs, the way the Muses did with Hercules. They are the three sons of the villain, a cattle rustler who steals herds of cattle by yodling (Pied Piper like).

Tarzan's co-director Chris Buck was reportedly originally supervising the villain Slim, but was asked to switch characters with animator Dale Baer (The Lion King, The Emperor's New Groove) who had started working on Meg the cow, for the new directors didn't feel that Chris's work on Slim was best suited for the movie.

Rumours started to float around in April 2002 that Disney had changed the title of its animated feature to Home on the Range. Also more rework will be done by the Disney artists: another character may have many scenes reanimated--all because the main character is supposedly now voiced by comedy actress Roseanne.

In August 2002, an Animated Movies spy visited Disney's feature animation gallery in California where Home on the Range was in post-production. "This one rabbit character that's cooking characters looked cute, but otherwise the characters look old. The hero reminds me of [The Emperor's New Groove's] Kronk, overweight with moustaches and brown and orange clothes. When he is away apparently, the farm turns into a Broadway set from the 30s, with [Busby Berkeley-inspired dance numbers] where dozens of cows dressed as co-stars perform synchronized dance routines. The backgrounds look ugly and the movie's merchandising looks even worse."

Contrary to rumor, Walt Disney Feature Animation's recent decision to swap the release dates of its upcoming releases, Home on the Range and Bears was not made because Home on the Range is still bedeviled with story problems, according to Jim Hill Media, but to leverage the upcoming release of the Platinum Edition of The Lion King to promote Bears. "Actually, now that Roseanne is in place to provide the voice for the film's lead cow, I'm told that this project has finally begun to gel. And that Home on the Range may now end up being one of the funnier films that WDFA has ever produced."

Jim Hill revealed in February 2003 that "the key to understanding Home on the Range is that it's supposed to be a comic western. More importantly, now that two of WDFA's sharper story guys--Will Finn & John Sanford--are actually riding herd on the thing (i.e. directing), Home on the Range has been turned into a BROADLY comic western. The in-house word on this particular project really is getting better, Olivier. I mean, now that Disney has so few real traditional animated features in its production pipeline, the studio has almost its entire A-Team either working on and/or consulting on Home on the Range. Even Chris Sander and Dean Deblois have recently put in some time on the project. Back in October, the Lilo & Stitch directing team was part of a brainstorming session, as WDFA looked for even more ways to 'plus' this production (i.e. make the film funnier, its story stronger). Trust me, Olivier. By November 2004, Home on the Range will be one funny film. Over the past seven years, this project has wandered a long way aways from its roots (Sweating Bullets' original, ambitious premise). But--when Home on the Range finally arrives at the multiplexes Thanksgiving-after-next--it's going to be one entertaining flick."

Mouse Planet reported on August 14, 2003 that "executives are bracing for the worst with next spring's Home on the Range. he film's production cost could exceed $175 million, in part due to story problems, a change in directors, and a delayed release (it was pushed back after Brother Bear.) One insider said he wouldn't be surprised if Home on the Range is 'criticized as Disney's worst film since The Black Cauldron. One of the notes that came back from the preview screening said that the movie 'was more boring than church!' It's a shame that Disney is going to go out with Home being the last example of what Disney can do'." This infuriated director Will Finn who wrote back saying: "Let objective minds make of it what they will when it comes out, but it is no service to 2-D animation to attempt sabotage to this film just because somebody's ego wasn't stroked enough during production. Every feature from Great Mouse to Finding Nemo has been tarred with this tired brush by somebody and the sky hasn't fallen yet. No wonder Disney is so keen on producing Chicken Little! Secondly, you report an audience preview quote that called Home 'more boring than church,' which your source could only have heard from either John or myself. We quoted this remark liberally as one of only two negative notes out of hundreds of favorable ones given at a preview last October. John and I found the quote funny enough to repeat, but by isolating it you have thrown it way out of context. You could just as easily write a one-line bio of Adolph Hitler that reads: 'He was a German guy who loved his pet schnauzer' and say you are not being inaccurate, just selective. For the record, the response to Home previews in October, April and one just two weeks ago were overwhelmingly positive, literally--unequivocal raves from parents and kids who laughed, cheered and applauded throughout. One typical one was from a lady who begged us to 'keep making 'em just like this one!' At the end of the recent screening kids were bouncing off the walls with glee, quoting lines and re-enacting scenes from our film. It was like a dream come true for those of us who have worked so hard on this film, which admittedly got off to a rocky start and has had its share of chaos through the years of production. What film hasn't, animated or otherwise?"

'JC' caught a screening of the movie at October 2003's ShowEast in Orlando and writes that "I really thought we were going to see a 'work in progress' film, somewhat akin to Beauty and the Beast special edition with a combination of pencil sketches rough drafts and completed animation. Boy was I wrong! This was a complete movie! Within the first two minutes of the film I knew we were in for a special treat! I won't go in to great detail about the story line but I can tell you this is going to be a great Disney classic. The animation reminded me of early 1950 Disney work and my son remarked the animals looked like they came right out of Mary Poppins! The musical score and songs from Alan Menken are topnotch. The blended computer and traditional animation were seamless. Both my children said it was one of the funniest movies they had ever seen and I have to agree with them in the context of recent Disney animated pictures. This is definitely the funniest since Aladdin. The movie received a huge round of applause at the finish with more than half of the audience waiting to leave until the final credits were through. This is going to be a bonafide hit for Disney." Check out Jim Hill Media for a detailed storyline which contains major spoilers!